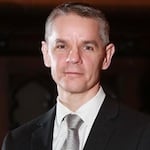 Bio
Neil Harmon joined the organ faculty at BYU in Fall 2018. Prior to his appointment at BYU he worked as full-time Director of Music and Organist at Grace United Methodist Church in Wilmington, Delaware for 19 years, where he became known throughout the region for his fine choral conducting, organ playing, composing, and arranging. Since 1989 he has maintained a successful studio of private organ, piano, and conducting students.

A native of Midvale, Utah, Dr. Harmon received early organ training from Dorothy Bradford and Linda Wildman. He completed a Bachelor of Music at BYU studying with Parley Belnap, Richard Elliott, and Don Cook. Graduate studies were at The Eastman School of Music, where he earned a Master of Music and Doctorate of Musical Arts, studying with Russell Saunders, David Craighead, and Michael Farris. Working as the Eastman School’s Organ Teaching Assistant, Dr. Harmon trained non-major organ students at the undergraduate, masters, and doctorate levels for three years. He was on the faculty of the Eastman School’s Community Education Division for four years.

Acclaimed as “one of the finest products of the American organ school,” [La Nuova Venezia] Dr. Harmon has performed in Europe, South America, and the United States. Performance venues have included Longwood Gardens, The Salt Lake Tabernacle, New York City’s Carnegie Hall, and the Church of Saint Nicolo dei Mendicoli in Venice, Italy. He serves as a Guest Organist at the Salt Lake Tabernacle on Temple Square, a service he has rendered since 1991. He has adjudicated for regional, national, and international organ competitions. Active in the American Guild of Organists, Dr. Harmon has served as chapter Dean, Sub-dean, and twice as Co-director of the Delaware Pipe Organ Encounter.

An award-winning composer, Dr. Harmon is known nationally for his creative and accessible organ, handbell, and choral compositions. His Requiem, for SATB chorus, soprano, and orchestra, has garnered accolades from around the country.

Neil served a mission for The Church of Jesus Christ of Latter-day Saints in São Paulo, Brazil. He and his wife, Anese, are the parents of five children.